A lost decade of growth in Latin America, with no signs of change

Between 2011 – 2021, major Latin American economies experienced a lost decade of growth in terms of gross domestic product (GDP) per capita. During this time, these economies — which are among the largest commodity exporters globally — suffered an overhang in commodity consumption. This came after a decade when China’s fixed-asset boom had driven commodity prices upward. The inability of Latin American governments to pursue a sustainable reform agenda during the previous good years also played a role in the poor performance in GDP per capita income. Essentially, these governments rode the strongest commodity markets of our lifetime without pushing through any meaningful sustainable reforms, or investing in education, technology, or developing industries to reduce dependence on commodities. Consequently, they lost competitive ground to the reform-minded China and India, which experienced strong sustainable growth from 2011 – 2021. During this period, China’s GDP per capita more than doubled and India’s rose by more than 50%, while Brazil’s fell almost 50% (Figure 1). 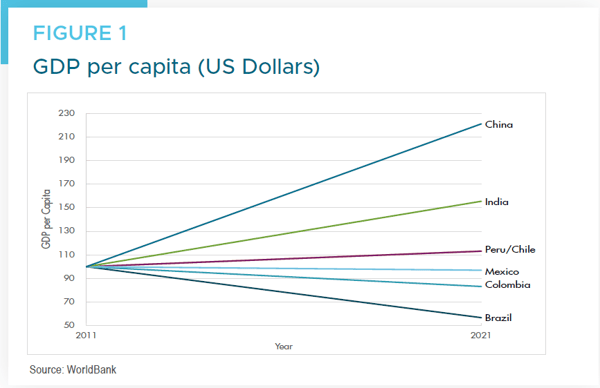 This divergence is even more remarkable when you consider that India and China combined have more than 10 times the population base of Brazil. Labor, social security, and taxes are among the areas that need comprehensive reform. For example, because of the complexities of the Brazilian tax code, a consumer in the city of Sao Paulo who purchases a pair of shoes online might find their purchase being shipped from a Sao Paulo distribution center to a logistics center in a neighboring state, before being shipped back to the consumer’s house in Sao Paulo. This is the kind of inefficiency that arises from decades of not addressing much needed reforms.

Why was the impact on equity investment returns?

One of the biggest challenges we see for the region is keeping the countries united in a common vision for their individual futures. Each government must effectively communicate its vision and repeatedly show evidence that their plan is positively impacting all segments of the population. The implications of the combination of a commodity overhang and lack of reforms were dramatic for equity investors: Total returns of major countries in Latin America were significantly lower than those of China and India in the 10-year period that ended December 31, 2021. Brazilian equities declined 25%, while Indian equities increased by 181% and China equities increased by 105% (Figure 2). 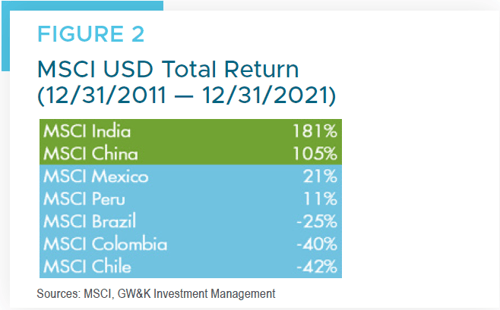 Could the coming decade bring about a reversal of fortune for Latin America?

Unfortunately, we do not believe that is the case for multiple reasons:

In the next 10 years, China’s wages are expected to increase meaningfully, causing more than 150 million manufacturing jobs to move out of China. Countries such as India have embraced a strategy of combining lower tax rates with investments in logistics, infrastructure, and education to attract foreign direct investment to capture this opportunity. Unfortunately, in Latin America we are not seeing leadership with the vision to put needed reforms in place to attract these manufacturing jobs. Despite strong entrepreneurship in countries such as Brazil, the lack of government reforms will likely hinder some advantages that aren’t related to commodities.

Where are the investment opportunities in Emerging Markets?

Emerging economies offer natural resources, young populations, cheap labor, and a large consumer market of more than four billion people. However, to translate these factors into sustainable productivity and real wage growth, governments need to have a long-term — and relentless — commitment to reforms. China and India have set a high bar in the last couple of decades, and in those countries more than 500 million people have risen into the global middle class. We expect that to continue, and we continue to remain skeptical towards Latin America’s ability to grow their middle class in a sustainable way. Our long-term view continues to be shaped by this belief. Well-run companies with strong brands and sustainable competitive advantages serving emerging market consumers in Asia are likely to continue to experience higher earnings growth and equity returns. 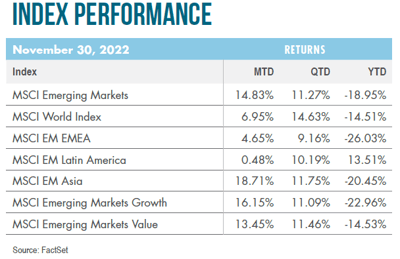 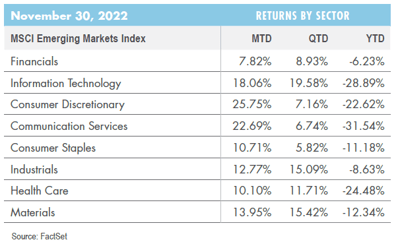 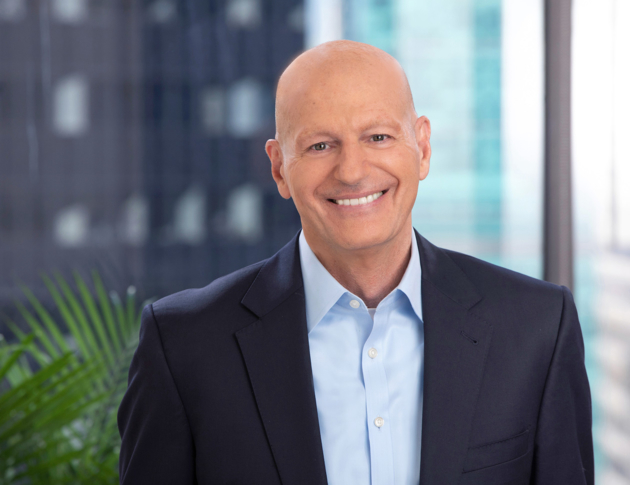 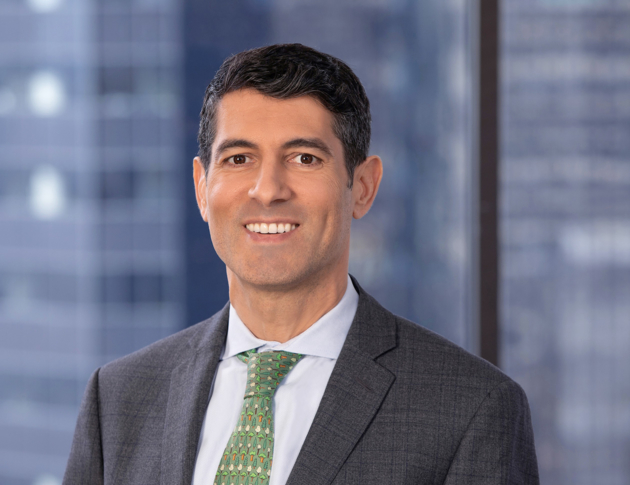 This represents the views and opinions of GW&K Investment Management. It does not constitute investment advice or an offer or solicitation to purchase or sell any security and is subject to change at any time due to changes in market or economic conditions. The comments should not be construed as a recommendation of individual holdings or market sectors, but as an illustration of broader themes.
Investing in securities or investment strategies, including GW&K’s Investment Strategies presented in this document, involves risk of loss that clients should be prepared to bear. No investment process is free of risk; no strategy or risk management technique can guarantee returns or eliminate risk in any market environment. There is no guarantee that GW&K’s investment processes will be profitable, and you therefore may lose money. Past performance is no guarantee of future results. The value of investments, as well as any investment income, is not guaranteed and can fluctuate based on market conditions. Diversification does not assure a profit or protect against loss. GW&K’s active management styles include equity and fixed income strategies that are subject to various risks, including those described in GW&K’s Form ADV Part 2A, Item 8. GW&K’s Form ADV Part 2A may be found at https://adviserinfo.sec.gov/Firm/121942 or is available from GW&K upon request.
Indexes are not subject to fees and expenses typically associated with managed accounts or investment funds. Investments cannot be made directly in an index. Index data has been obtained from third-party data providers that GW&K believes to be reliable, but GW&K does not guarantee its accuracy, completeness or timeliness. Third-party data providers make no warranties or representations relating to the accuracy, completeness or timeliness of the data they provide and are not liable for any damages relating to this data. The third-party data may not be further redistributed or used without the relevant third-party’s consent. Sources for index data include: Bloomberg (www.bloomberg.com), FactSet (www.factset.com), ICE (www.theice.com), FTSE Russell (www.ftserussell.com), MSCI (www.msci.com) and Standard & Poor’s (www.standardandpoors.com).

GW&K's CIO and Portfolio Managers share their insights and opinions on the economy and market each quarter.